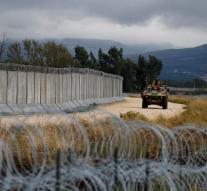 ankara - A Turkish soldier was killed in clashes with fighters from Islamic State in northern Syria. This was announced by the Turkish army Friday. Another five soldiers were injured.

The fight not only took on the part of the Turkish army life: four Turkey-backed rebels also died and another 25 were injured.

Thursday also were already dead: three Turkish soldiers were killed in what the Turkish army claimed was an attack on the Syrian air force. It was the first time that Turkish soldiers killed by running an attack by the Syrian army since Turkey in August surgeries on Syrian territory. Ankara has already informed to proceed to reprisals.