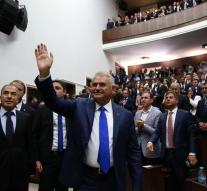 ankara - The ruling Turkish AK Party could look forward to a internal cleansing. Prime Minister Yildirim announced Tuesday that he 'terrorists' will exterminate within the party. By this he means supporters of the Muslim cleric Gulen, which is in accordance with the Turkish government after the failed coup last summer.

Yildirim made his statement to MPs of his own party. the Turkish authorities since the attempted coup of July 15 are working to reduce Gülen's influence. Thousands of soldiers, but also judges, policemen and even teachers have been arrested or put out their duties because of alleged links with the movement Gülen.

The cleric himself denies having anything to do with the coup. He lives in the United States. Turkey, the Americans asked for his extradition.