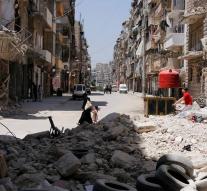 beirut - Observers of the Syrian Observatory of Human Rights (SOHR) reported Monday that the fighting was escalated at Ayn Diqna, about 30 kilometers north of Aleppo. Also, the SDF would be taken by Turkish soldiers. The pro-Turkish warriors in the area are doing an offensive, according to the observers.

In the fight against the Sunni extremists of IS, the US supports the SDF. These consist mainly of Kurdish militia, the YPG or People's Protection Units. Ankara considers the Kurdish guerrilla to be terrorist and a great danger to Turkey's unity.

The Turkish government is furthermore a fierce opponent of Syrian President Assad's regime and supports rebels that consist mainly of Sunni Arabs. The Assad and Kurdish troops work locally together in the civil war in Syria.