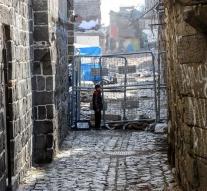 diyarbakir - At least three Turkish police officers were slain Monday by a roadside bomb as the bus they were in was hit in the province of Diyarbakir in southeast Turkey. Nine officers were injured.

The bomb exploded near the campus of the University of Dicle. No one has yet claimed responsibility for the attack, but the Kurdistan Workers' Party PKK has committed more such attacks in the past police and army.