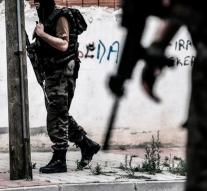 Special troops from the police entered the house on Tuesday on Wednesday because they had evidence that the militant cell was preparing an attack.