Home / World / Turkish police is within by scientists 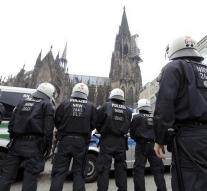 - Turkish police on Wednesday raided the office of an important public scientific organization. It involves the Scientific and Technological Research Council of Turkey, TUBITAK, according to local media.

According to local TV station NTV, the police took a large group of people with it.

The raid follows the failed coup of July 15th. According to Minister Recep Tayyip Erdogan is the movement of cleric Fethullah Gulen residing in the US behind the attempted coup, and since then the Turkish authorities to hunt supporters.