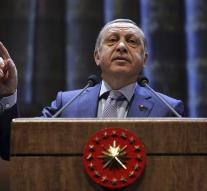 ankara - The Turkish police Friday raided several higher courts after arrest warrants were issued for 189 judges and public prosecutors. They would have been involved in the failed coup last summer.

Among those arrested are judges of the Department of Justice, the Court of Cassation and the State Council, according to the Turkish news agency Anadolu.