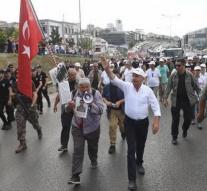 abkara - The Turkish police arrested 61 protesters on Sunday in Ankara. They demanded the release of two teachers who were thrown into prison two months ago because they had been in hunger strike to get back their jobs. They lost the suspicion of involvement in the failed coup last July.

According to the CNN Türk TV channel, the police used tear gas and water guns to expel the protesters of Kizilay Square in the center of the capital. Some activists were dragged and dragged away, others did not return much later to continue their protest.

The hunger strikers, who according to the court belonged to an ultralink group, wanted attention by refusing food for the approximately 150,000 government officials who were fired or suspended after the coup.