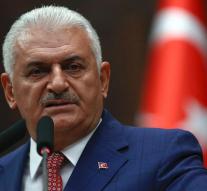 - The European Union should take note of the British voting to move and rethink his political views in the EU. This said, the Turkish Prime Minister Binali Yildirim Friday.

,, The EU needs to revise its future after this development, '' Yildirim stressed for television. He also criticized British Prime Minister David Cameron, because his campaign to keep the UK in the European Union, based on the idea that a possible Turkish membership of the bloc is still far away.