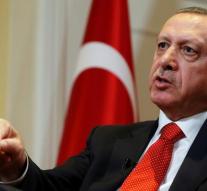 ankara - The largest opposition party of Turkey is fighting a series of measures that the government has issued under the state of emergency. The government has not, as required by the decrees, submitted to parliament within a month, the CHP complains.

The parliament has not yet been able to examine the offending eight decrees because it is in recess, Turkish media report. According to the CHP, the government of President Recep Tayyip Erdogan thereby the constitution underfoot.

The Erdogan government went after the failed coup of July 15, boasts that the people stood united behind the government action against the coup plotters and their supposed allies, which would show the support of the entire opposition. However, those talks after initial wariness increasingly apparent against the purges.