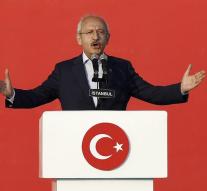 ankara - A convoy of Turkish opposition leader Kemal Kilicdaroglu has entered Thursday in a shootout between police and a group of unknown assailants. Which reported Turkish news channels, including CNN Türk.

The politician was not hurt in the attack. There was in his company or an injured person. Kilicdaroglu was protected by bodyguards. The leader of the Republican People's Party (CHP) visited the northeast of the country.