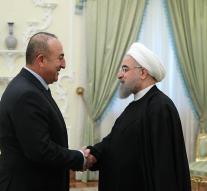 tehran - Turkish Foreign Minister Mevlüt Cavusoglu on Saturday paid a surprise visit to Iran and met with his colleague Mohammad Javad Zarif and President Hassan Rouhani. The main topics were the war in Syria and the fight against Islamic State.

' Despite the differences look the governments of both countries to find solutions and try to come closer in their positions, especially with regard to Syria and Iraq, '' IRNA news agency made known. Iran, a Shiite country and ally of Syrian President Assad, and the predominantly Sunni Turkey have long been diametrically opposed. The relationship improved by Tehran, the Turkish government after the failed coup in July pledged support.

Both countries have an interest in pooling of forces to put an end to the chaos in the region and massive flow of refugees. ' They can return home only if we have ensured peace. That must happen, 'Rouhani said after the meeting. ' Iran and Turkey have the necessary influence to resolve together, without the Western powers, problems. ''