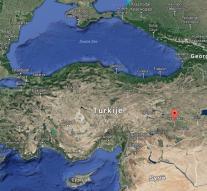 diyarbakir - Three Turkish miners were killed by a landslide. They were buried and thirteen of their colleagues were trapped in a copper mine in Diyarbakir in southeastern Turkey. Rescuers make frantic efforts to free them, the authorities reported Friday.

Because of the heavy rainfall, there is a risk of more landslides, warned the owner of the mine.