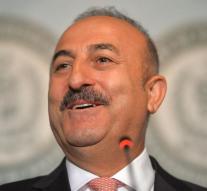 ankara - Two Turkish military attaches at the embassy in Greece have fled to Italy when they were recalled to Ankara after the failed military coup. That said, the Turkish foreign minister Thursday against the broadcaster NTV.

,, We know that the two diplomats in Greece tried to go abroad. According to information they have fled to Italy on 6 August. We will ask them to return the Italian authorities, '' said Minister Mevlut Cavusoglu.

According to Cavusoglu, some diplomats still on the run after Turkey began a purge of the army and the civil service after the failed coup.


In total, 160 members of the Army, including nine generals who are wanted in connection with the coup attempt on July 15 fugitive, he informed.