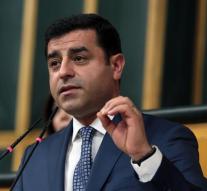 - Justice in Turkey wants five years's put behind bars the leader of the pro-Kurdish HDP. Selahattin Demirtaş, one of the two chairmen of the progressive and pro-Kurdish party has been guilty of the prosecutor to 'spreading terrorist propaganda'.

The Turkish news agency Dogan reported the claim, which has yet to be pronounced on Friday according to the indictment. Besides Demirtas Justice still complains a parliamentarian from the HDP to.

The lot is in a corner since President Recep Tayyip Erdogan was able to convince the rest of the Parliament of lifting the immunity of Representatives. For the Turkish government, the HDP a mouthpiece of the militant PKK, which Turkey is at war.