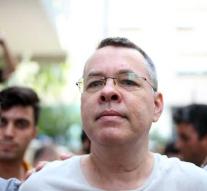 ankara - A Turkish judge dismissed in appeal the release of the American reverend Andrew Brunson. That is what the broadcaster Haberturk announced on Friday.

Brunson is under house arrest, after having been in prison for more than a year and a half. He is accused of terrorist activities and involvement in the failed coup in 2016.

The preacher, who has been running a small Christian congregation in Izmir for many years, denies all accusations. He has had President Donald Trump at his side for some time. It caused a diplomatic crisis between the US and Turkey. Due to the American sanctions and the threat of more punitive measures, the lira has fallen sharply in value.