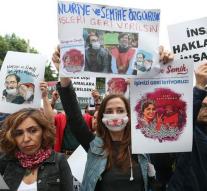 During the match, Volkan Caliskan held a banner with the text 'Let Nuriye and Semih live!' Together with sixteen others. Nuriye Gülmen and Semih Özakca are teachers who have been in hunger strike for five months because they want their job back. They were fired after the coup attempt last year and are also stuck in the meanwhile.

The uncle of Caliskan confirms that his cousin is stuck in the Sincar prison in Ankara. The other sixteen have also been arrested.

According to the Turkish media, the seventeen were arrested for propaganda for a terrorist organization.