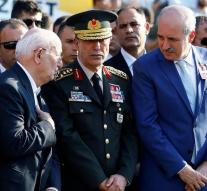 ankara - The Turkish government had no information it was a military coup in preparation until it was already in full swing. With that contradicts the Turkish Deputy Prime Minister Numan Kurtulmus Tuesday statements by the military supremacy.

The general staff of the army said earlier on Tuesday that became known around 16. 00 pm on Friday, July 15 information was a coup imminent. Then the foremost authorities would these be notified.

The deputy prime minister also spoke messages against being missing for a number of ships of the Turkish Navy since Friday night.