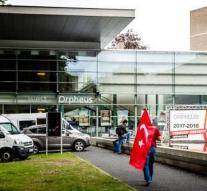 apeldoorn - Turkish Dutch people have remembered the failed coup in Turkey last year in Apeldoorn on Tuesday evening. There is a disappointment that the deputy prime minister should not come. 'But we called on our back to keep calm,' said Mustafa Aslan, Secretary of the Organizing Union of European Turkish Democrats (UETD).

The Cabinet said earlier that Turkish Deputy Prime Minister Tugrul Türkes, in view of the poor diplomatic relations, is not welcome. There was no reason for unrest around the meeting, said Aslan. 'Our people come here to commemorate the slain and tortured ones. Some of them have lost relatives. '

The organization expected that between 500 and 700 people attended the meeting. The actual number seemed to be lower in the half-room. The commemoration took place in Apeldoorn partly because the organization in Rotterdam and Amsterdam could not find a suitable location, according to the secretary.

On a big screen, nationalist video clips were shown. Also images of the failed coup were shown. It was quiet at the start of the meeting around Orpheus theater in Apeldoorn.

Agents stood at the entrance and in the streets around the theater stood the police and a single bus of the ME. Because it was a memorial meeting, the municipality of Apeldoorn saw no reason to ban it.