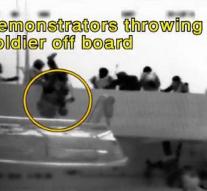 - Turkish court on Friday ended a lawsuit against former Israeli army commanders. Justice sued Israel's top military personnel, including the Chief of Staff, for the death of ten Turkish activists. The victims were targeted in 2010 by Israeli commandos boarded a ship which was en route with supplies to the Gaza Strip.

The massacre on the ship, the Mavi Marmara, leading to a major diplomatic row. Turkey decided to formally break ties with Israel. Last summer, the countries recovered finally their relationship. Israel pledged $ 20 million to be paid to the relatives. Turkey promised that all Israeli parties concerned go unpunished.

The prosecutor had asked the court to drop all requirements in accordance with the agreement. Kin asked the court precisely to ignore the deal and continue with the process. They did not get their way, reported Turkish media. According to the newspaper Daily Sabah stranded earlier an attempt to make the agreement itself overturned by the Constitutional Court.

Those aboard the Mavi Marmara wanted to break the Israeli naval blockade of Gaza to deliver aid into the Palestinian area. However not allow ships bound for Gaza- Israel stood- and stands. The Israeli government wants to keep control over everything entering the area, especially since Hamas is in control in the 'largest open-air prison in the world', as many Palestinians call it. Hamas is the destruction of Israel as its official target.

Moreover, the defendants were not present when dealing with their case in Turkey. They sit safely in Israel.