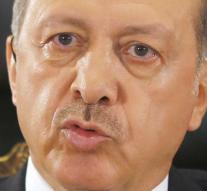 ankara - The Turkish authorities are undaunted by the persbreidel. According to CNN Türk are Wednesday three news agencies closed, sixteen channels went black and 45 newspapers received a publication ban.

A total of 130 media were addressed by the government Erdogan.

There were new purges in the army. There are 1684 soldiers were sacked, including many officers.

#Flash Beside the other media outlets, here are list of 45 newspapers closed under State of Emergency in Turkey pic.twitter.com/oSXf0qESxj