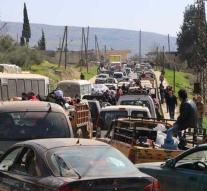 In a statement, the army said that it now controls more than half of the Afrin region in Turkey and has conquered some 'areas of crucial importance'.

The Turkish army invaded the northwest of Syria on 20 January to expel Kurdish fighters. The YPG militias (People's Protection Units) are, in the eyes of the Turkish government, an extension of the terrorist PKK.

Ankara wants to prevent a connection with a much larger Kurdish area east of it.