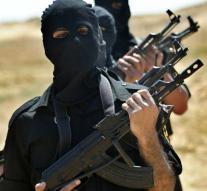 belek - The Turkish army has four fighters terrorist organization Islamic State (IS) shot dead near the border with Syria, after they had opened fire on the soldiers. That Saturday sources have reported to Turkish security forces.

The IS- fighters drove two cars along the border south of the Turkish place Oguzeli. The terrorists fired at the soldiers after they were summoned to leave.