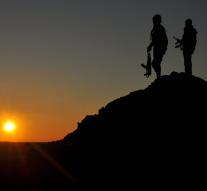 diyarbakir - In an action by the Turkish army in the southeastern town of Cizre, six Kurdish fighters and a Turkish soldier killed. That the army announced Friday.

Government forces have been eleven days working on a security operation which aims to tackle PKK militants. The Kurds have been especially active in the southeast of the country. According to the government over the last thirty years, more than 40 000 people died in the uprising of the Kurds.

The Turkish news agency Dogan reported Friday that since the beginning of the current action of the army and a half weeks ago, 205 PKK fighters were killed.