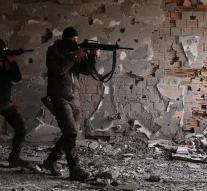 ankara - Turkish security forces have killed 99 warriors from the Kurdish Labor Party (PKK) in the southeastern Turkey in the last two weeks. One of them belonged to the 'higher grades', according to a communication Saturday of the Turkish armed forces.

The armed forces attacked the PKK shelters and warehouses in the provinces of Sirnak and Hakkari, not far from the border with Iraq. During the operation, 420 kg of ammonium nitrate, a raw material for explosives, as well as bombs and firearms were seized.

Turkey, the United States and the European Union regard the PKK as a terrorist organization. The group, which has been fighting for more than thirty years for autonomy for the predominantly Kurdish territories in southeastern Turkey, has bases in the mountains on either side of the border.