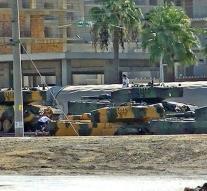 beirut - Turkish military vehicles entered the Syrian province of Idlib on Sunday. That reported sources in the border area. Turkish vehicles were escorted by warriors of jihadist Tahrir al-Sham when they entered the country at the Atmeh transition.

On Saturday, Turkish President Erdogan announced that Ankara-supported Syrian rebels would start an offensive in the area. He stated that no Turkish soldiers were involved in that offensive.

The Syrian Observatory on Human Rights reported Sunday that the Turkish army in the border area had been successful with the jihadists and that both sides were shot.