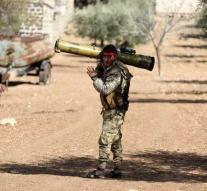 damascus - After a week of offensive, Turkish soldiers have reached the outskirts of the city of Afrin in the north of Syria. The Syrian Observatory for Human Rights reported that the Turks are advancing on the east side of the city.

The Turkish soldiers cooperate with Syrian rebels against President Bashar al-Assad during the operation. In the offensive, the Turks also carry out aerial actions. Ankara started an offensive to get Afrin, because the YPG militias had control over that city and the district of the same name. Ankara sees the Kurdish YPG as a terrorist movement and a threat to Turkish national security.

Reporters from the British channel Sky News have also arrived in Afrin. Kurds in the city tell reporters that they are the target of ethnic cleansing by the Turks.