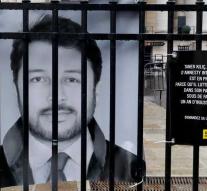 istanbul - A Turkish judge has ruled that Taner Kiliç, the president of Amnesty in Turkey, must remain in prison. The human rights organization has announced this via Twitter on Thursday. Kiliç will certainly be locked until November 7. Only then will the next hearing be on the program.

According to Amnesty, the prolongation of his detention confirms once again just before the elections that Ankara is not taking it so closely with the freedom of expression and human rights.

The preses of Amnesty Turkey was arrested more than a year ago on suspicion of ties with Fethullah Gülen. The Erdogan government accuses this Islamic clergyman living in the US of being the brain behind the failed coup in July 2016. Amnesty states that no trace of evidence has been provided for Kiliç's involvement.