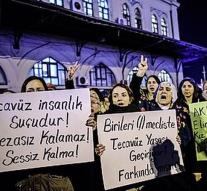 - There is great fuss in Turkey, now the Islamic governing party AKP men who have abused underage girls encouraged to marry their victims. If they do, they will avoid prison, according to the controversial bill.

It would be in cases where the minor girl would not have done and would have consented to sexual intercourse.

The opposition parties CHP (secular and center left) and MHP (nationalist right) are against the bill. The Kurdish party HDP should have nothing of it, but it does because of a protest against the arrest of her party members not participate in voting in parliament. Also Turkish women's organizations have made strong criticism, and in some cities, and social media in Turkey there are many protests against the bill.

It might sound nice to the minor girl would have agreed to the sexual intercourse, but they are usually forced by the family into practice. She would say after the rape no longer be 'pure', so the only solution, according to her family to marry the perpetrator. By marriage gets the child victim of abuse has been so life with her abuser. This happens in practice already common in Turkey. But the AKP now wants that this is also supported and encouraged by law.

According to Turkish law says you have to be married at least 17 years. But child marriages are religious in nature and are very common in the country. It's hard to see how many underage girls in Turkey were married after using statistics because the marriages are performed by an imam, and usually are not officially registered. Estimates assume that about a third of all marriages child marriages.

Especially in the central and eastern Turkey, the rate of child marriages high. In the city of Sanliurfa is the number of estimated at 60 percent of the total. In many cases the girls are abducted before being raped. The most common death among girls aged 15 to 19 years because of health problems after they became pregnant. More than 80 percent of minors who get married are illiterate.