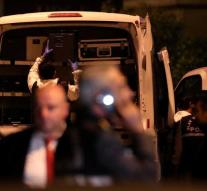 istanbul - Turkish researchers have left the consulate of Saudi Arabia in Istanbul. According to a witness from Reuters news agency, a team of about ten agents left the building after a search of about 9.5 hours. Not long after that the Turkish prosecutor came out to investigate the disappearance of Jamal Khashoggi.

The consulate is the last place where the Saudi journalist is seen alive. He entered the building in early October and did not come out anymore. Samples were taken at the consulate. A police dog was also part of the research team.

Television channel CNN Türk reported earlier that the team searches for DNA traces of the missing journalist. The investigation would not be limited to the diplomatic post. Pool height would also be taken in the nearby official residence of the consul.