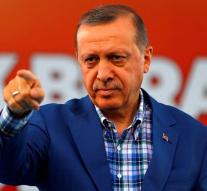 ankara - Turkey will be relentless in its fight against armed groups such as Islamic State or the Kurdish PKK. That Minister Recep Tayyip Erdogan said Sunday.

Erdogan spoke to thousands of supporters in Gaziantep, southern Turkey town where a suicide attack at a wedding earlier this month, 54 people lost their lives. The killer probably acting on behalf of IS.,, Our operations will continue against terrorist movements to the end, '' said the president.

The Turkish government sent this month the Syrian border troops and tanks about to do battle with their opponents. According to Erdogan, the offensive meant people who were chased by IS, for example, from letting go of the Syrian border town Jarablus back home.