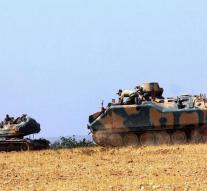 ankara - As Syrian rebels trying to recapture the border town Jarablus they can count on Islamic State on the support of Turkey. That said, the Turkish Foreign Minister Mevlut Cavusoglu Tuesday. The rebels have indicated that an offensive is imminent.

The future of Jarablus is important for the security of Turkey, Cavusoglu said. Turkey wants to prevent the Kurdish YPG militia, which controls all parts of northern Syria, also in the strategically located Jarablus get the shots.

On the other side of the border, in Karkamış, residents were urged to leave Tuesday, after the city was hit by mortar shells. The Turkish army shot back after the grenades were smashed, CNN Turk reported.