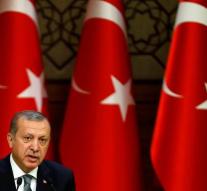 - The Turkish authorities to arrest another 47 journalists. Reported CNN Türk. The measure is linked to tougher action after the failed military coup.

Police are deployed to address the journalists as part of an investigation into the spiritual leader Fethullah Gülen, residing in the US. Which was seen as the brains behind the coup attempt in mid-July by 'Ankara', where at least 246 people were slain.

The journalists worked for the newspaper affiliated with Gulen Zaman. Which was acquired in March by the Turkish authorities as part of a clampdown on supporters of the preacher.