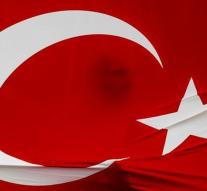 The Turkish prosecutor wants the director of the Turkish department of Amnesty International Idi Eser and ten other human rights activists to enter the cell until 15, the news transmitter CNN Türk reports Sunday. The eleven are accused of giving support to and membership of a terrorist organization.

Idil Eser was arrested on July 5 with seven other Turkish human rights activists and two trainers from Germany and Sweden. They participated in a workshop digital security organized by the Dutch organization HIVOS on an island near Istanbul. They are stuck in anticipation of their process. Three others have been released but must also be responsible for the court later.

Amnesty International called in July the arrest of Eser and the other human rights activists 'grotesque abuse of power' and called in vain for their immediate release.