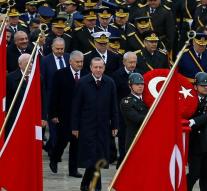 - Turkey wants to introduce the death penalty. Erdogan said Saturday that the government is preparing a bill that direction which will be presented soon.

'I think the parliament will approve the law and that if I get before it would sign him,' said the head of state in a speech in Istanbul that was broadcast by Turkish television.

Since the failed coup of July 15, Erdogan has repeatedly alluded to the death penalty for the coup plotters and their accomplices. The Turkish parliament scrapped the death penalty in 2004, during the preparations for the negotiations with the EU accession. The union has already announced that dialogue to stop immediately if Turkey enters the penalty again.