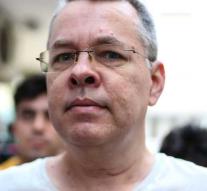 jerusalem - Turkey can end the diplomatic conflict with the United States by letting the American preacher Andrew Brunson go. That is what the American national security adviser John Bolton says, which Ankara maintains that 'this crisis can be ended immediately'. \u0026 # X27; \u0026 # x27; if the spiritual ' without conditions \u0026 # x27; \u0026 # x27; can leave.

Bolton concluded that during a visit to Israel. ' the Turkish government made a big mistake by not letting Father Brunson go ''. He also stated that Turkish membership of NATO for Washington is not yet under discussion. 'We are targeting Brunson and other Americans who have been unlawfully detained by the Turkish government. We expect a solution. ''

The fate of Brunson is the deployment of a high-level diplomatic dispute between the NATO allies. The preacher is suspected of involvement in the failed coup d'état two years ago. The US demands its release and, among other things, imposed sanctions on two Turkish ministers.