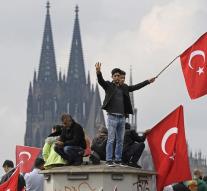 ankara - The Turkish government has summoned the German ambassador to Turkey. He must give a full explanation about the demonstration in favor of the Turkish President Recep Tayyip Erdogan in Cologne on Sunday. Ankara displeased because Germany did not allow Erdogan to address the protesters by video link.

A spokesman for Erdogan called the decision of the Constitutional Court in Karlsruhe to ban previously unacceptable direct speech. He demanded a 'satisfactory explanation '' of Berlin.

Cologne gathered Sunday a small 40 000 people to Erdogan and his government in the wake of the failed coup two weeks ago to show their support. Erdogan on behalf of an acknowledgment was read.


The German ambassador is on vacation and was replaced by his deputy.