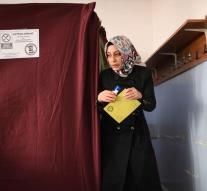 bodrum - More than 55 million Turks vote today in a referendum for or against constitutional amendments. If 'evet' (yes) wins, then Turkey is a parliamentary democracy, but it turns into a presidential system. The president is head of state except head of the executive. The prime minister and the cabinet are abolished in that case, the president appoints the ministers and they can now also dismiss and can dissolve parliament. He will have more influence on the judiciary. The parliament may in principle sell a president, but a large majority required for that. The age at which you will be brought forward to be elected to parliament from 25 to 18 years. The number of seats in parliament will be expanded from 550 to 600 in the proposal.

Proponents argue that this new system makes the country stronger and more united. Turkey would otherwise be too divided and may have weak governments. 'For a strong Turkey we go to the polls,' headlines the pro-government Yeni Safak newspaper. Erdogan has often removed during the campaign for the referendum to the West because it operates the 'no' campaign has supported in his eyes. He brought this morning, hailed by many fans, his voice in the conservative Uskudar district on the Asian side of Istanbul.

In the Kurdish southeast was there as usual violent stand. In a shooting this morning two people were slain by the son of a village chief in a polling station in a school near Diyarbakir. During an armed attack by the PKK on a bus that was advertising for 'yes' a village guard was shot dead yesterday in the eastern province of Van. Many Kurds will vote against the referendum Erdogan.

A whole other place 'no' surely triumph, is the resort of Bodrum. Here the secular social democratic opposition party CHP always wins the election. It is directly opposite the Greek island of Kos. Once the mid-April here would be full of foreign tourists, but now find they are barely. 'We have now been mostly Arab tourists,' says a friendly ice cream vendor. 'I think the tourists from the West await the outcome of today. If 'no' wins, they will hopefully right back! '

A man at middle age who just released his voice in a school has been wrecked. Yes, you vote on pretty white paper and 'no' voices do you like brown paper that reminds me of something else. That did Erdogan expres! 'He says verbally.

On a seaside terrace enjoying the 70-year-old architect Erkan, wearing a cap and a scarf from the sun. 'Life is beautiful here. But if Erdogan wins the referendum, then I will emigrate, 'he threatens. He then holds a speech on Marx and Engels and find that we live in difficult times. 'Fascism in Europe is back and we stting here but stuck with Erdogan,' said Erkan. As always Erdogan wins elections and referendums, Erkan is still optimistic; 'I think 'no' with 50. 5% going to win,' he says hopefully.