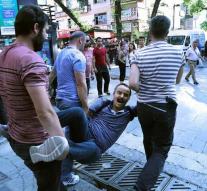 ankara - The Turkish authorities arrested more than a thousand people last week. They are suspected of involvement in attempting a coup last year or of ties with militant groups, according to the Minister of Interior Monday.

According to the Ministry, 831 people would have supported the attempted coup. Ankara is still responsible for the spirit of Fethullah Gülen, living in America. He would be the brain behind the failed coup in July. 213 detainees are suspected of having ties with the forbidden Kurdish Labor Party PKK and 46 others belonging to Islamic State.

Turkey has held more than 50,000 people in the aftermath of the coup attempt. Also, about 150,000 people are fired or suspended from jobs in public and private sectors.