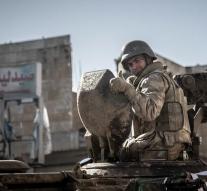 ankara - Turkey, together with the coalition fighting against Islamic State (IS) slain in northern Syria dozens of fighters of the terrorist group. This broadcaster Haberturk reported Monday.

With air strikes and cross-border artillery fire 33 targets were attacked. During the operation 23 IS fighters were killed. The attack was directed against militants who were suspected of preparing an attack on Turkey, Haberturk says.