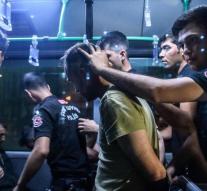 - The Turkish security forces in several cities still looking for a number in the failed coup soldiers involved and their weapons. But there is no danger of a renewed attempt to seize power, said a security official Monday.

Some senior officers who had participated in the coup attempt have fled abroad, he said. The Turkish military command,, inflicted a heavy blow to the organization '' by the coup attempt, but still functions in cooperation with the intelligence services, the police and the government, '' the official added.