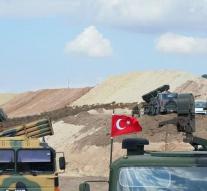 ankara - Turkish soldiers set up observation posts in the Syrian province of Idlib. This happens according to the armed forces because of the agreements made with Russia and Iran, among other things, about setting up the so-called escalation zones.

International observers, including from Turkey, must oversee compliance with a truce in those areas. Syrian and Russian devices are not bombarded in the designated area, said an official of Turkey-supported Free Syrian Army (FSA).

The FSA official also said that the presence of Turkish soldiers is intended to prevent 'the separatist YPG militaries from illegally gaining more territory. 'Turkey sees that militia, an ally of the US, as an extension of the forbidden Kurdish PKK movement.

Turkish soldiers, according to a witness, quit the border with tens of vehicles, after scouts had already arrived. According to state agency Anadolu, they received a warm welcome. Syrians reportedly scanned slogans as 'we all love Erdogan. '