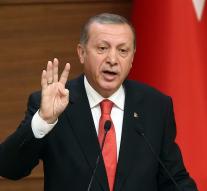 - Turkey has strong evidence that a new flow of refugees from Syria has started. Minister Recep Tayyip Erdogan said at a meeting of a legal organization that the new power is the result of the intensification of the attacks on the city of Aleppo.

He reiterated his plea for Syrian rebels to train and provide more equipment and a safe zone to catch the people who are beaten in the flight. " If we do that, I think that the migration from Syria will stop ", said the president. In Turkey, more than two million displaced persons from Syria.

German Foreign Minister Frank-Walter Steinmeier said on Thursday that cause the bombing of the Russian air force more refugees.