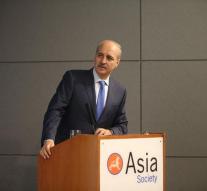 Archenemy Turkey, but also the United States, the patron of the YPG, demanding that the Kurdish armed group retreats to the eastern bank of the Euphrates River. The YPG itself held recently insisted that his fighters Manbij, which lies on the western bank of the Euphrates, have long been abandoned. There were only some Arab-Syrian comrades of the YPG have remained in the city.

Turkey considers the YPG as an extension of the outlawed PKK, the Turkish-Kurdish extremist movement that is engaged in a bloody conflict with Ankara.