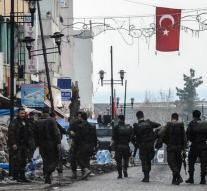 - Turkish warplanes have sat in the southeast of the country air attacks on Kurdish fighters. Thirteen suspected fighters of the Kurdish separatist PKK were killed, sources said the army.