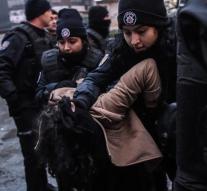 istanbul - The Turkish authorities last week 1682 people arrested on suspicion of links to militant organizations. 516 of them were firmly put after interrogation, informed the Turkish Interior Ministry Monday.

Most of the detainees, in 1096, suspected of links with the organization of Fethullah Gulen, the cleric who was according to Ankara after the failed coup in July. 416 of them were being put.

Further 78 people were being put because of links with the PKK and twelve for their ties to Islamic State.

The arrests followed a part in the assassination last Monday to the Russian ambassador in Ankara, which according to the authorities was committed by a follower of Gulen. In the weeks before committing a splinter group of the PKK two bomb attacks on Turkish police and military in Istanbul and Kayseri.

The Ministry also indicated that 1960 illegal migrants were arrested, 419 of them at sea. Were also 29 suspected smugglers nabbed.