Home / World / Turkey: No attack on Raqqa with Kurds 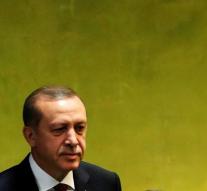 ankara - Turkey is willing to participate in an attack on Raqqa, the unofficial capital of the Islamic State in Syria, but not when Kurdish fighters join such an offensive. That said a spokesman for Turkish President Recep Tayyip Erdogan on Thursday.

The spokesman said there were currently being discussed with partners in the international coalition against IS, but that Ankara holds the same conditions as in previous attacks on IS-strongholds like Manbij and Jarablus. ' It is impossible to join us in an operation in which the PYD and YPG are present. '' Turkey considers the Syrian Kurdish YPG as an extension of the Turkish-Kurdish PKK. Turkey sees the latter group as a terrorist organization. The PYD is the political wing of the YPG.

' In principle we support the intention of Raqqa and other Syrian cities purify Daesh, but as we said earlier, we do have principles and requirements in this area. '' Daesh is the Arabic name for IS.