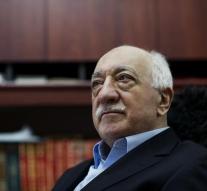 Muhammed Sait Gülen would be arrested in Erzurum in northeastern Turkey. He will be transferred to the capital Ankara for further questioning. For the first time, has been arrested a relative of Gülen after the failed coup attempt last week.

Turkey is very keen on the extradition of the 75-year-old Islamic scholar Gülen. Erdogan gives him the blame for the failed power grab in Turkey last week. Gülen resident since 1999 in exile in the US state of Pennsylvania. He denies anything with the failed coup, in which 246 people have arrived to life.