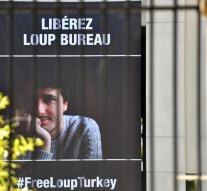 Bureau was arrested at the border with Iraq at the end of July and imprisoned for charges of Kurdish militia. He wanted to report on the YPG, Syrian Kurds who fought against the Islamic state with the US coalition. Ankara considers the YPG as an extension of the forbidden Kurdish PKK.