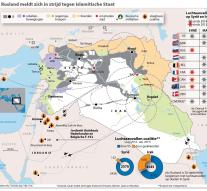 ankara - The Turkish military has carried out airstrikes Sunday on targets of the Kurdistan Workers Party PKK. According to a statement shelters and positions of the PKK were destroyed in Metina and Zap in northern Iraq. In Lice, in southeastern Turkey , fourteen militants slain .

A day earlier, made ​​the leadership of the PKK just announced that it has summoned no longer carry out attacks its own fighters, unless they themselves are attacked by Turkey.

That was the first time since the breakup of a file in july. The leadership of the PKK stated at the Firat news site, which has links with the Kurds, that the decision was taken after that end was summoned from Turkey and other countries. The movement wants the elections in Turkey in November " fair and just " expired.